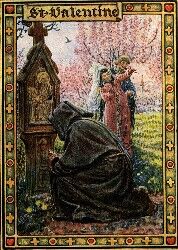 At first glance the title of this article seems to be a list of three mutually exclusive topics but as we will see they are all in alignment today as they were some 1,700 years ago. The story of Valentine ’s Day does not begin with Cupid or with other Pagan practices of debauchery. Like most other holidays, Christmas and Easter being two examples, the pagans certainly were not the inventors of what and why Christians now celebrate. Sure, I know Pagans had celebrations on all of these days and many times pop culture mixes and blends a litany of Christian, Pagan and modern customs to form some hybrid of the original celebration. I guess if we looked at enough Pagan cultures throughout history and other religious traditions, we could probably list some celebration on virtually every day of the year. A quick glance on Wikipedia of major religious holidays around the globe revealed over 100 major holidays and celebrations. Literally, every month has something and most ancient religions and societies’ holidays are simply gone and forgotten.

I don’t think it is the Christian’s duty to research exhaustively every day of the Julian calendar to make sure we aren’t celebrating on some silly former pagan festival. I guess to those Christians who feel the need to boycott every major holiday because of its supposed pagan origin should go all the way in their logic and refuse to follow the Julian calendar since it was created by the Pagan Julius Cesar and is based off  the sun (Romans worshiped the sun God “Sol Invictus”). Maybe we should go back to the lunar calendar of the Jews to be more biblical? But unfortunately, even the Jewish calendar was later influenced by the Babylonians and thus all hope of a truly Christian day, let alone celebration, is going to be difficult by those who think some pagan similarity is reason to throw the “baby out with the bathwater.”

For the rest of us who don’t feel going out to dinner with our spouse is somehow a pagan practice, there is still much for us to learn and realize. Our modern celebration of Valentine’s Day doesn’t come from the pagans but rather from Christians. In 269 A.D. Bishop Valentine broke rank with the “laws of the land” and disobeyed Emperor Claudias edict not to perform marriage ceremonies. Statism for those unfamiliar with the term is a Totalitarian rule by the state or government over every area of life. The Emperor believed that unmarried men were better fighters than married men who would be afraid to fight and die knowing they have a wife and perhaps children back home. Thus, the Emperor’s edict against marriage stood in contrast to the Christian teaching to “be fruitful and multiply” (Gen 1:28). Also, coupled with the Christian teaching that sexually intimacy was to be had between one man and one woman, and that all other sexual activity was sinful, the issue of Christians not being able marry caused a real problem for the Christians, that it would not have with their immoral pagan neighbors. For the pagans their sexual mores were not much different from today (in fact they were believe it or not probably much worse and degrading). Nonetheless an unmarried man would not have the dilemma of marriage or celibacy that the Christian would have, but rather they could and would have many sexual partners and perhaps even children out of wedlock. Thus, to them marriage was just a piece of paper and probably something that most young men would have seen as unnecessary anyway. Polygamy and even homosexuality would have been common place, so it’s not as though this edict would have caused a societal protest by most.  I know it is hard for us to imagine such a society, in which such values and mores were common place, but it’s easy if you try.

That brings us to Bishop Valentine. Valentine was what society would consider a renegade, but what Christ would call an obedient disciple. He knew his calling to God and the church outweighed his allegiance to the Roman state. Hence, he secretly performed marriage ceremonies, marrying young Christian couples. However, then like now the state doesn’t like a challenge to its authority. Valentine was arrested and sent before the Roman prefect where he was sentenced to be beaten, stoned, and then beheaded. The enemies of the gospel have always sought to use fear as a demotivator for Christians. Certainly, they hoped their harsh treatment of Valentine would not only discourage people from following the biblical pattern for marriage but that it would discourage people from being Christian. Of course, Valentine was first given the chance to renounce Christ and bow to the pagan state. An offer in which he quickly refused and rather used as a witnessing opportunity. Rome and its Emperor sought to show its power was greater than the power of Christ. But the Roman Empire with all its power and strength came crumbling down in the end, not the church. One account of Valentine’s imprisonment, the one from which we get our modern Valentine’s Day tradition, is that while in prison he prayed for the jailers daughter who was blind. Apparently, the girl was healed, and the jailer and his daughter become Christian. The day of his execution he left a letter to the girl in which the final line was signed “From your Valentine.”

The exact day of Valentine’s execution is uncertain but in the 5th Century the church would declare Feb. 14th St. Valentine’s Day to honor the actions of this devoted follower and to show and celebrate true Christian love over many of the pagan festivities that would take place on this day. Thus, like Christmas and Easter, Valentine’s Day embodies victory over Paganism, not succumbing to it. Though Paganism may be virtually dead and gone for all intents and purposes in the modern function of the world, we must remember that Paganism was not only a false ideology and religion but that it was powered and supported by the state. The state may no longer bow to Sol Invictus or demand Emperor worship. But the power and mind set of paganism remains in the state seeking to crush the worldview of all who oppose it, especially the Christian worldview.

Since Christianity is now and has historically been the biggest threat to immoral governments and immoral laws. I am thankful we live in a society in which we are no longer killed for our Christian faith (many countries don’t have this luxury). However, often for very less than our lives we will compromise our faith for expediency, money, or simply out of peer pressure of what pop culture says is right. At a time in history where governments all over the world seek to redefine marriage, many of which have legal consequences for detractors, we must remember our call to the gospel of Christ is one of obedience, no matter what the cost. We must seek to be obedient in all areas of life and we must put the gospel message and the law of God above the opinions and fashions of man. Whether it is Rome with its marriage ban, Communist China with its one child per family law, the US with its Eugenics sterilization campaign in the 1930’s or Planned Parenthood today we must reject that which is not of God. As you celebrate this evening with long waits in restaurant lobbies, ponder these things with the one you love. The issue isn’t whether or not you celebrate or don’t celebrate Valentine’s Day. The bigger issue is to realize love is a gift from God, but that came at a price. Often our love will be tested and undergo trials and tribulations, but like St. Valentine, I pray you to stay faithful.